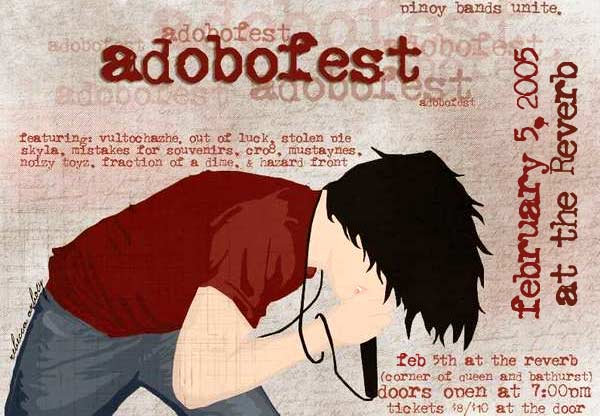 Upon entering the hall I was immediately caught by the turn-out of the event. It’s virtually a full house. I was met instantly by Katie, vox sensation of Stolen Pie, and Out of Luck’s riff meister Anjo at the entrance. They recognized me as a familiar face and made a great effort in allowing for a friendly reception (thanks guys). I arrived an hour late, a small attempt in exercising my pinoy-ness. As I weaved my way towards the stage ‘cro8’ was performing their last song. It sounded full and heavy. Jayson, (formerly of RiR’s Chivalry), handled microphone duties with supreme authority and sounded as if one of his lungs gave way while whipping out the last growl. I asked around about how many bands had performed already and got a squeak in the background telling me that this was the second band so far, cro8 that is. 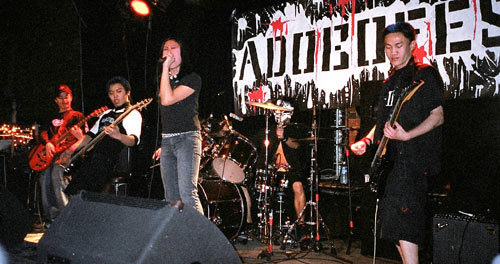 AdoboFest co-founder Rex was emceeing for the nite and introduced the next band to be “Mistakes for Souvenirs” (MFS) … This was my second MFS experience, I was invited by bassist Rey to an MFS gig at the Opera House last month. I found their songs to be on the mellow side which is a refreshing change from our everyday grungefest. During the course of MFS’ performance I couldn’t help but notice the eeriness of their songs. It did not wreak happy-shiny chords nor did it cast dark undertones …. It’s like listening to an acoustic version of ‘Portishead’ except not as dark. It had just the right amount of ‘pop-ness’ and mainstream angst (not that there’s anything wrong with that). I was beginning to dig it the second time around. Vox responsibilities were done by Hannah … the closest pinay-gwen-stefanie prototype if ever I saw one. Her range was impressive and gave their songs a smooth yet serated edge. At the end of their set I approached the backstage to greet VIP backstage dwellers, Edwin and Adrian (Vultocazhe, Skyla). Edwin was sporting a cold, which I got afterwards, thanks ‘dwin, whilst Adrian sported a mohawk hairdo that mocked Tony Kanal’s. 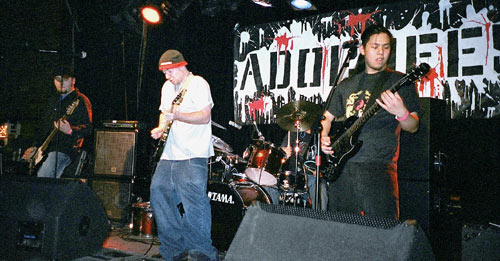 As MFS cleared the stage Rex made way for ‘This’. Yeah that’s right next was ‘This’. Careful inspection of This’ band crew sort of threw me off. First there was the rhythm guitar player, Ian, who had hair like a retro Kirk Hammett. Their lead guitar and vox, Paul, reminded me of Eminem with his cleancut looks, baggy pants, and folded touque. Chino, their drummer impressed me as someone who looked like a straight A student. Although as much as they had an ironic mixture of styles their sound and performance was, literally, far from it. The moment Ian belted out that skreaching voice there was no question that they were for real. I was not only impressed by Paul’s guitar skills but moreso was I impressed with Chino’s drumming performance and accuracy. He was working down those syncopations as timely as a Swiss-made watch. Impressive. Their songs were unmistakable in influence and direction — think ‘Billy Talent’. For those talent seekers like myself I was looking at a band that will certainly get the chance to be in the limelight. It was just a question of when. ‘This’ was It, so to speak. After their performance I heard someone uttered the words … ‘That was freakin awesome!’. 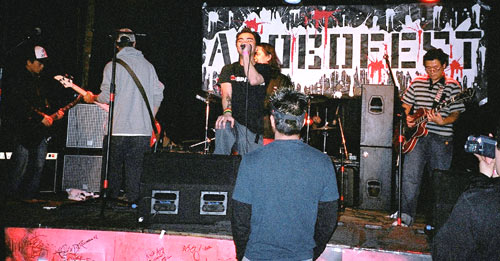 The next band to perform was ‘Fraction of a Dime’ (FD). The first person who came to the stage was FD’s drummer. He demonstrated his double-pedal skills while waiting for his mates to finish setting up. He was perhaps a bit challenged by Chino’s supremacy in double-pedal duties that he felt compelled to prove he’s in the same league. Judging from their set I would have to say that his skills as a drummer were not as accurate as Chino’s but certainly up to snuff. 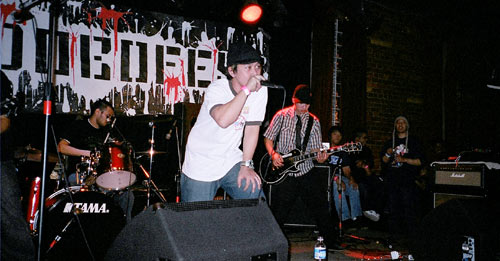 It was a long time since I’ve been at a Noizy Toyz (NT) gig … certainly one of RiR’s best … When it comes to performance, stage theatrics, and gimmickry, NT delivers. On that night they did not dissapoint. NT opened with their signature ska-themed tune SKAM … an anthem to the Supernova empire. Then what followed was something out of the ordinary. They played a popular Filipino pop tune. People chanted in droves to the lyrics up until a musical pause …. this gave way to Andy’s flame-broiled pinoy curses. Andy’s cursing delivery came out so natural and effortless that it seemed he was talking in tongues. It was a well engineered intro to their ultra-catchy tune ‘Century Drive’. A song written about their collective experiences as musicians, and primarily as friends, in their regular practice haven, Rikki’s house (NT’s guitar guru). The birthplace of NT. The performance progressed to a point when Andy tried to pull a Full Monty but was unsuccessful due to the presence of his boxers. 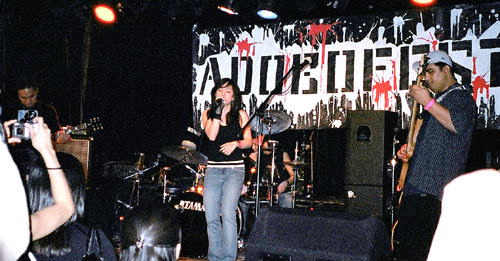 The following performers were introduced as ‘Stolen Pie’ (SP). SP was the only all-cover band playing that night. The band is fronted by the faerie-esque ‘Katie’ at the microphones. Her charm was surely evident … when she splurted out the first three words ’99 red balloons’ the front-stage gents were all eager to give her a boisterous rouse … Ace (guitars) quietly riffed through the chords of the song, literally …. for a moment I thought there was a power failure onstage as Ace’s amp was not at all audible … A quick glance to the mixing engineer told me something was wrong … I looked over the mixing desk and no one was there ! … where’s the dude ? … I asked the manager of his whereabouts and did not appear to know … He assured me though that he would find him and get him back to his duties pronto … The guy showed-up finally, a few minutes later .. he appeared to be ‘stoned’ .. his first words to me was ‘Yeah .. yeah .. yeah’ and every time he said it he gave me a half-assed smile .. he said those three words again after he sat down his chair and looked at me with a wider smile … I was getting weirded out so I decided to catch some outside air before proceeding to approach the stage again. 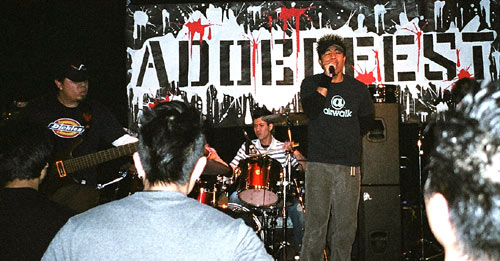 Next in queue is unquestionably one of the most established band in the pinoy underground scene, RiR’s own, Vultocazhe (Vulto) … As many of you are aware Vulto will be releasing a full album with RiR soon. Recording is still under way at RiR studios and should be made available within the year. One of the most striking development of Vulto as a band is their rapidly increasing fanbase. What’s not to like about Vulto? … They’ve got intensity, they’ve got rockstar flair … they’ve got the most original repertoire in the independent scene .. they may also be our biggest hope in putting pinoy-rock on the Billboard charts, Vulto is for real … When they all got settled there were a number of people in the crowd chanting the words (Vulto!..Vulto!..Vulto!) .. this got progressively louder until Don(drums) gave the first 4 counts of their opening song ‘End’ .. an irony in itself .. There was something about how Vulto sounded live that puts them in a league all their own .. it is that they manage to achieve a full yet clear sound no matter where they play … It sounded huge and wide and not have the common ‘live’ dilemma of having every sound fight for the same space .. As a result, there was an added dimension to their live sound … The climax of their set happened during their fourth song ‘Ode’ wherein Vlad gives his all while vocalizing the last chorus lines of the catchy song. If there was ever a song that would launch Vulto into stardom it would be through the song ‘Ode’. This song has all the sweet melodic qualities of an ‘Our Lady Peace’ song as well as the energy level of a ‘Billy Talent’ tune. You owe it to yourself to listen to ‘Ode’. Vulto’s performance was highlighted by the incredible abilities of Adrian(guitars) to whip his beautiful Paul-Reed-Smith (PRS) guitar around his back and end up at the front again. It was quite the spectacle ! … Vulto du Soleil … He did this numerous times and every time he did it people cheered wildly .. At one time he ended up on top of a full Marshall stack while he was delivering the riffs on his guitar… Adrian’s performance that night was mesmerizing. 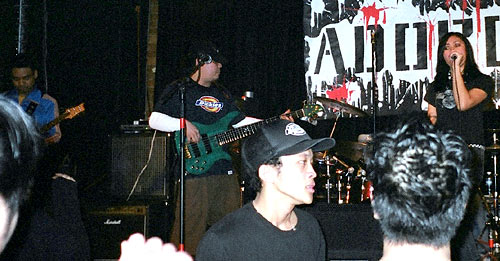 Due to follow was ‘Skyla’. A band consisted mostly of members from other AdoboFest bands except for Filbert(guitars) and Chris(drummer, sis of Don from Vultocazhe).. The other members were Adrian(guitars), Edwin(Bass), both from ‘Vultocazhe’, and Hannah(vox) of ‘Mistakes for Souvenirs’. Skyla’s sound reminded me of the early ‘No Doubt’ days. It was undeniably catchy. Filbert’s guitar skills were just incredible, not a single finger was stationary. Chris’ drumming was accurate and busy. It was great to see that a girl can rock just as hard, or even better, than her male counterparts of the show. You go girl … Skyla’s songs were full of phrases that made you want to bob your head to … Filbert’s crafty way of fingering chords that rendered beautiful harmonies reminiscent of popjazz ballads of days past… ala ‘Cafe Bleu’ or ‘Beautiful South’, it was ear candy 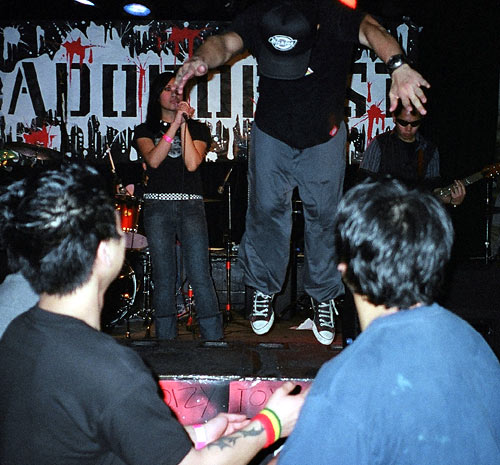 … Then in the middle of their set there was this frontstage dude who stole the show. He proceeded backstage, ran the depth of the stage and jumped (arms stretched forward) into an army of floorlevel dudes waiting to catch him. He did this numerous times. Every time he would make his jump different from the one before. He did a corkscrew, a somersault, and a full nelson. He was fearless … My only worry is that if an incident similar to the first scene of ‘School of Rock’ had happened … it would not be pretty … Definitely, a helpless experience … He was then referred to as the ‘Adobo Jumper’. 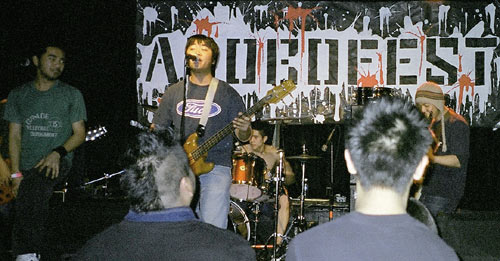 It was certainly getting late … I figured that the next band would be where I would end my AdoboFest experience. The following band turned out to be ‘Out of Luck’ (OL) … I must say that during their opening number I thought that they were just another punk rock clone in an endless sea of punk rock clones … Yet upon listening further I really began to ‘dig’ their simplicity and innocence. It was as if I was transported back in the days when music was made for the sake of music and away from fame or vanity. They started with the song ‘Just Fine’ which breaks out into this hook of a chorus that subjects you to sing with Ronnie (vox/guitars) … OL’s beats were being delivered with punk rock authority by none other than Jeff (drums, bro of Don from Vulto) who felt the need to bare his midriff as it was popular with the femmes. Anjo, the other half of the Adobofest foundation, was working up the guitars and had his signature blonde-Dutch-milkmaid touque in place. I truly enjoyed OL’s gig and would certainly stay-up later if they were even the last band to perform. Great job guys.

While I may have missed performances from ‘Mustaynes’, ‘Hazard Front’, and ‘Sweet Contradiction’ it was, as it is already, a very gratifying gig to experience new up and coming talents … I salute the founders and organizers of the AdoboFest concert, Anjo and Rex, for not only realising an ambitious task but to pull it off with the least of effort. Well done guys … I truly enjoyed myself.