Radio Insect Records (RiR) was formed around August 1998 by Phil Mark and Elena Nañez. RiR’s formation came about in response to the ‘wasted’ talent that go unnoticed for a lot of the Asian (Filipino) youths in Toronto, Canada.

It was July 1998 that the centennial celebration of the Philippines was being held at Toronto’s entertainment/sports facility ‘Skydome’ (now called ‘Rogers Center’). Numerous Filipino bands were part of the entertainment portion of the festivity including Phil and Elena with their band ‘Jules’.   Elena was as well the main production manager of entertainment.   As a side effect of Elena’s responsibilities, Phil and Elena had the privilege of listening to, first-hand, an assortment of demo tapes (acquired from musicians hoping to get a spot) submitted for consideration. They were surprised by the quality and caliber of compositions that the young musicians were submitting. More so were they overwhelmed by the number of entries that were processed. They decided soon after the event to approach some of the bands and ask if they could join them for an independently released CD compilation for a record label yet to be formed (a.k.a. RiR). The approach was that RiR would carry ALL the production costs as well as its promotion and distribution. There would be no expense at all for the musician(s) in return for RiR’s control of the album’s revenues. This approach would significantly benefit young Filipino musicians for not having to worry about ridiculous production costs of releasing a CD on their own and also benefit from the recognition they would gain because of it. RiR would also allow them the freedom to contribute to the artwork and content of the resulting album/EP. The response gathered from this was overwhelming and most certainly guarantees multiple RiR releases for years to come.

NOTE: RiR chooses NOT to reserve the right to ‘own’ the lyrics and/or music created by its musicians (clients). Musicians handled by RiR, however, have all the right to make RiR their ‘home’ record label from which they could release and distribute their own material. In this case, a completely new scheme of profit sharing (or royalty distribution) takes place and is mutually agreed upon by RiR and its musician(s) in writing and then finalized by signature.

Our name was inspired by Tears For Fears’ apocalyptic song “Famous Last Words”. A passage in the song reads:

Depicting two people in love and their eventual demise from an atomic bomb bombardment. Towards the end .. “insects and grass are all that remain”. Insects are perhaps the most resilient beings on this planet. Able to survive the harshest of conditions, a survivor’s survivor.

In direct correlation, a “radio insect” is a fictitious entity that lives inside the universe of “radio”. The world of entertainment is very unforgiving as it is rife with wickedness and challenges from trend-setting paradigms initiated by its ‘bigger’ players. We’d like to see ourselves as resilient ‘insects’ of such an industry. Persevering with every obstacle, thriving from adversity.

RiR’s goal is to produce, manage, promote, distribute multi-cultural music, with focus on (but not exclusive to) Asian talents the world over. Internet is the underlying medium of choice which RiR uses to get to its customers. Due to its global popularity, convenience and scope, the internet is an obvious choice to channel distribution and sampling of RiR media.

RiR’s humble studio facility is the cornerstone of every RiR production and release since its inception. Current and future RiR releases will make use of this facility in all aspects of production as much as possible. The studio is also open to private contractual arrangements upon request. 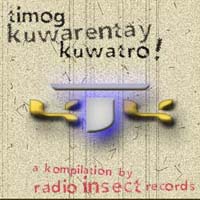 RiR’s debut album was a compilation of 4 all-original bands (Chivalry, Gimik, Jules, Julian). It was named ‘Timog Kuwarentay Kuwatro’ (TKK), a.k.a. 44 degrees North, which translates to the latitudinal orientation of the city of Toronto (Canada) relative to the northern axis. The title is an appropriate one considering that aside from the common ancestral roots (Filipino) a common locale is also shared amongst all of TKK’s musicians, Toronto. TKK is comprised of ten songs. A total of four bands contributed to TKK’s song repertoire. The songs range from Gimik’s refreshing pop single ‘Makilala’ to the edgy syncopated guitar riffs of Julian’s ‘Ikaw at Ako’. TKK’s success was felt all the way to the Philippines and had stop-overs in numerous US states (including Hawaii) as well as other Canadian provinces.

On July 2006 RiR was awarded the opportunity and privilege to join Apple’s “iTunes” as a Label Partner thus having the luxury of the world’s largest digital music download destination right at its doorstep. The internet and iTunes are the primary channels used to distribute and sell all current and future RiR releases.  Since then RiR had evolved beyond the scope iTunes and integrated various digital streaming services as Spotify, Pandora, iHeart Radio, Google Play, and Deezer to name a few. Local distribution here in Toronto will be done through various music store-fronts and multi-cultural places of business.

If you are interested or curious in anything that we do or could provide to help you please don’t hesitate to email us at info[at]radioinsectrecords.com.